I’m in Pamplona now, running with the Bulls…

Well, I’m not that dumb.

I’ve not had Internet access for two days, so unable to blog. Catching up now.

Weather forecast for the Pyrenees was for heavy rain. Almost went the valley route, but decided to chance it and glad I did! No rain, miraculous days, above the clouds!

Steep ascents, mostly on narrow Shepard roads and hard 8k descent through beechwood forest with slippery footing that pushes your toes through your boots, your knees out your body and your leg muscles turn into jello. Much more difficult than the books made it out to be–at least for folks my age. But then, I seem to be the only one my age on it!

My friend new friend Dan, sloughing down the slope, above the clouds.

Spent the night in this auberge: pilgrim living, communal style:10 men and women in bunk beds–I don’t have to extend my arm to touch the ceiling. One toliet. Snoring competition at night. The Big American is a snorting walrus, the Japanese make quick grunts like Kung fu fighting, the Korean sounds like he’s walking on hot coals. The Korean girl in the bunk under mine calls me “hi-bed.” So I call her “lo-bed.” She’s very shy. But it makes her smile.

Most pilgrims–myself included–take only 2-3 pairs of everything: t-shirts, socks, underwear, and all quick drying. Laundry becomes a daily ritual. 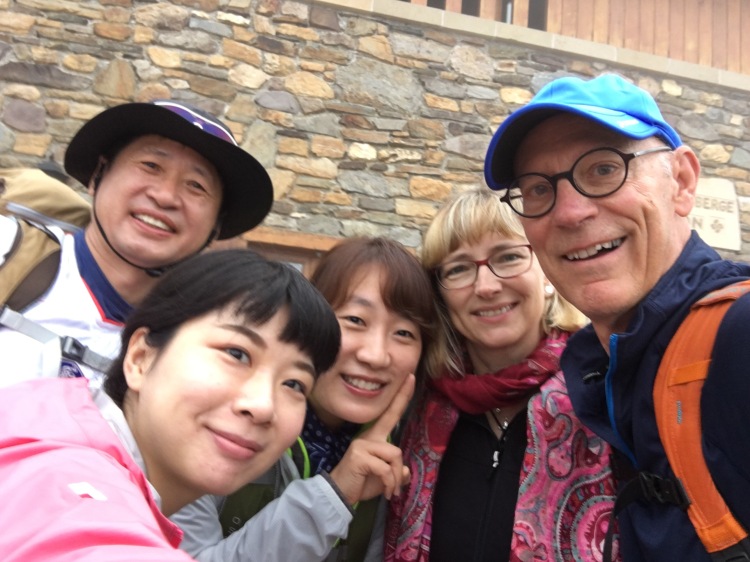 Some of my fellow “bunk mates” the next morning just before we hit the Camino. Two Koreans, one Japanese, one German.

My half-body close to the ceiling.

Leaving the next morning in dense fog. Cattle, sheep and horses dot the mountains and they all wear heavy bells, creating a symphony of sounds. 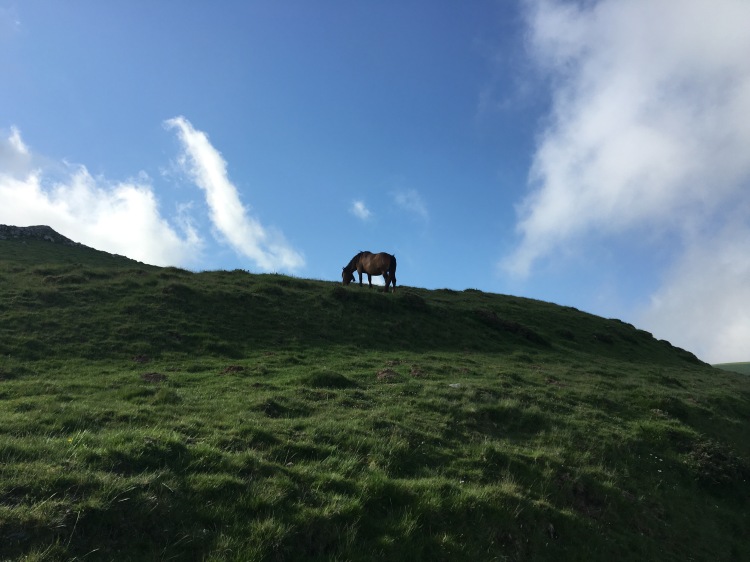 Water! Hmm: the horses are drinking upstream from it!

The border between France and Navarra–Spain. Fastest Customs ever!

Everything aches: legs, feet, back. But made it over and to village of Ronvesvalles and to rest.

After Mass in Ronvesvalles that night, the priest called all the peregrines to the altar for a special blessing. I need it.

Tomorrow we do it all again: Walk. Drink. Eat. Sleep. Repeat…

Next stop: Zubiri. And I thought we were out of the mountains and steep slopes for a while.

One thought on “Over the Pyrenees!”